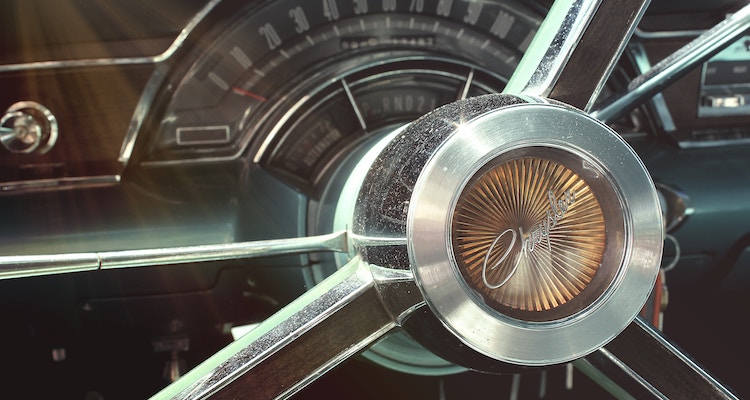 In the early 1950s, American car makers were building cars full-tilt. While sales were healthy, though, most the companies were still looking for untapped niches to expand into. The reasoning was that if they could discover niches that were currently under served, they could design vehicles to meet the niche’s needs and become the primary source. A good example of this concept in practice was DIVCO (Detroit Industrial Vehicle Corporation,) a Detroit-based company that built special delivery vans for milk delivery businesses. Active in the 1940s and 50s, DIVCO delivery vans performed so well that they enjoyed a virtual monopoly in the milk distribution business.

Like the other manufacturers in the early 1950s, Chrysler was also putting resources into uncovering new niches.  Apparently Chrysler marketing executives, at some point, noted that more and more women were taking an interest in car ownership. This may seem hard to believe to day but historically the automotive marketplace was totally male-dominated. However with increased prosperity and the advent of two vehicle households, women were now becoming a new buying segment. Chrysler Corporation “decided” that what the country’s women needed was a car of their own.

In 1954, Chrysler built a show car that was designed for women; it was called La Comtesse. Our sources at Ziegler Chrysler Dodge Jeep Ram (Downers Grove, IL) explained to us that the Comtesse was built from a Chrysler Newport and was painted either “Dusty Rose” and “Pigeon Grey.” Favorable responses from the show attendees and the press encouraged Chrysler to pursue the concept and go into production.

The company’s design department went to work and in 1955 Dodge released the La Femme. The La Femme was a special version of Dodge’s Royal Lancer. The La Femme-trimmed cars were available exclusively in sapphire white or heather rose paint. The interior of the car received special attention. La Femme interiors were upholstered in a special material featuring pink rosebuds on a silver-pink background.

Each La Femme also came with a keystone-shaped, pink calfskin purse that coordinated with the interior colors of the car. The purse could be stowed in a special compartment mounted in the back of the passenger seat. Each purse was outfitted a face-powder compact, cigarette lighter, lipstick case, cigarette case, and change purse. All accessories were made of pink calfskin and gold-tone metal, and were designed and made by “Evans”, a Chicago-based maker of women’s fine accessories.

Alas, the La Femme concept was not well accepted.  Because the model was an option package ($143), its total production was never broken out from Dodge’s production numbers, although automotive historians suggest that  fewer than 2,500 were made.

Many theories exist concerning the low sales of the La Femme. Apparently, Chrysler failed to drive sales with advertisments in magazines, television, or radio. Also, although there were a large number of Dodge dealerships in the U.S. at the time, few of them received a demonstration models for their showrooms. Instead, single-sheet dealer pamphlets were the only clue that Dodge La Femme were available. Bottom line: the model may have been a market failure more for promotional reasons that the design and performance of the car itself.

5 Best Dance Festivals Around The World

Dance festivals are a lot of fun to attend, especially when you are with friends, because it allows you to enjoy the experience of…