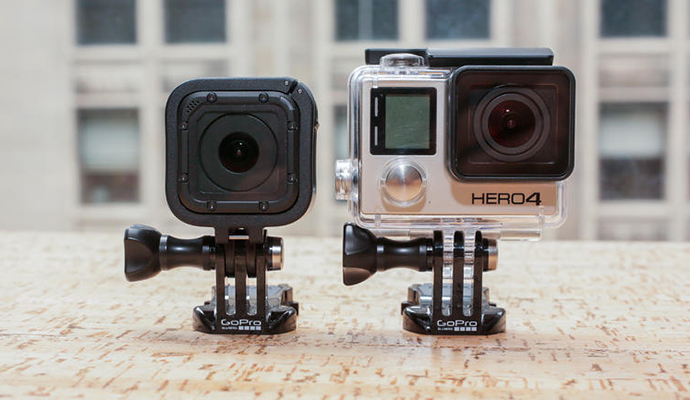 GoPro, the company behind the small action cameras, has come up with an even smaller camera called the Hero4 Session. The first thing that jumps out when you take a look at this new camera is the tiny size, the Hero4 Session is about the size of an ice cube, but according to GoPro, it is also their most rugged action camera.

The small size is something that people who use action cameras will appreciate, because it makes it even easier to take around and record action shots. Another new design feature for the Hero4 Sessions is the ability to use it to record underwater for up to 33 feet, without having to put it in an enclosure, which was something that other GoPro cameras need.

After using it in water, the Hero4 Session microphone drains very quickly, and you can start using it almost immediately after. The small size of the camera means that you have to make a few sacrifices. The camera does not have a screen, so can’t view your pictures while using it, unlike the other GoPro cameras, it doesn’t have extra buttons that allow you to change modes, and there is no way to replace its battery, which means you are going to have to charge it every two hours.

The sacrifices seem to be worth it, because the camera still shoots in full HD, and the small size gives users the ability to take pictures and record videos in almost any action situation, since it can fit almost anywhere, including under a skateboard.

When it comes to performance, the Hero4 Session lacks the video quality of its predecessors. This is due to the fact that sensors and video processors in other GoPro cameras give off a lot of heat, and the designs of those cameras allow for heat dissipation, which is something the Hero4 Session design doesn’t allow. None the less, the processor inside the Hero4 Session does a pretty good job, because it still records in full HD, and the 25Mbps video quality is also pretty good. If you take a closer look at the video quality, you will realize that it isn’t as good as the Hero4 Silver, but it isn’t something that can easily be noticed unless comparing videos from both on a big screen.

The Hero4 Session is another great camera from GoPro, and the size makes it appealing, especially for extreme sports enthusiasts, because it can be used anywhere. The only major problem I had with it is the fact that you can’t replace the battery, but that is a minor inconvenience, so if you are looking for a very compact action camera to take some quality videos with, this is the camera for you.

Eyewear trends of the future

Whenever you end up watching some film or TV footage from another era, one aspect that always stands out above the rest is how…