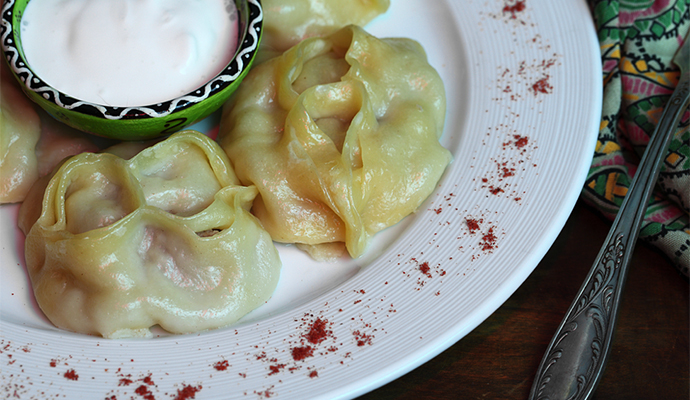 Due to their nomadic way of life and the harsh conditions on the windswept steppes, the Mongolian people have built their diet around what is readily available, which basically amounts to meat, meat, and more meat. Vegans and vegetarians will definitely have a hard time finding something to eat here, while proponents of the Atkins diet will certainly never go hungry. Based around the so called ‘5 snouts’, their cuisine incorporates meat from horses, sheep, goats, camels, and yaks. The animals’ milk doesn’t go to waste either, as it’s used for all kinds of dairy products, and even as a base for home-brewed vodka.

Whether you’re invited to join a Mongolian family for a communal meal in a Ger (Mongolian hut) or at their apartment, or you try the national cuisine in a restaurant or from a street vender, the first thing you’re likely to notice is the less than appetising smell. While we may prefer to eat lean meat, the Mongolian people see fatty meat as being higher quality, and certainly adding a high percentage of animal fat into their diet helps them to withstand the freezing temperatures and relentless outdoor work of their climate and culture.

The meat is usually cooked using a ‘hot stone’ cooking technique, or added to noodle soups or dumplings, while the milk is used to make a diverse variety of beverages plus cheese, yoghurt and curds.

The national drink of Mongolia, Airag, is made from fermented mare’s milk, and is a popular beverage for celebrations, such as weddings and festivals. However, if you ever offer a cup of Airag, beware – it has an alcohol content of 7%.

Aaruul is a typical Mongolian product made from curdled milk that has been dehydrated and dried. It has the advantage of never going bad, and is often used to thicken traditional noodle soups.

Although meat is often boiled, the most traditional method for cooking meat is by using stones which have been baked in a fire until they are red hot. These stones are either put into the cooking vessel with the meat or inserted inside the animal carcass itself. Take the Boodog, for example, where an animal – generally a Marmot or young goat – has its insides and bones removed before being stuffed with hot stones and sealed. The whole carcass is then placed onto a barbecue, which not only helps the meat to cook through evenly, but which burns off the animal fur too.

Meat cooked in this way is very tender, tasty and fragrant. Another type of barbecue is the Khorkhog, which is usually made with mutton. Sometimes vegetables are added to make a stew, and occasionally some seasoning and spices may be added too.

In some ways, dumplings are the Mongolian version of fast food and you should definitely try all three versions.

Mongolian cuisine has been largely influenced by their neighbours, Russia and China.

Similar to those made in China, noodle soups are very popular in Mongolia. Prepared with homemade roughly cut noodles, stock, meat and some vegetables, they provide a hearty meal all year round, although the consistency varies according to the season, as does the level of spice and type of meat used. Curd from yak’s milk may also be added for a thicker soup.

If you’re a massive foodie and in particular, a meat lover, you need to get yourself to Mongolia. There are a number of great trips you can do around Mongolia, whether you’re stopping by for a short trip, or planning a two week adventure there. Just don’t forget to pack your stretchy pants – with all the amazing food, you’ll definitely need them!

Bio – Katie has been an avid fan of travel since she was little girl, often spending her time watching planes leaving Sydney and wishing she was on them, regardless of their destination. She has since made her passion her living, indulging in every possible food, fashion and lifestyle the world has to offer. You can follow her on Twitter.

What’s the difference between all-wheel drive and four-wheel drive? They certainly sound similar to one another, what with four-wheels usually being all a vehicle…