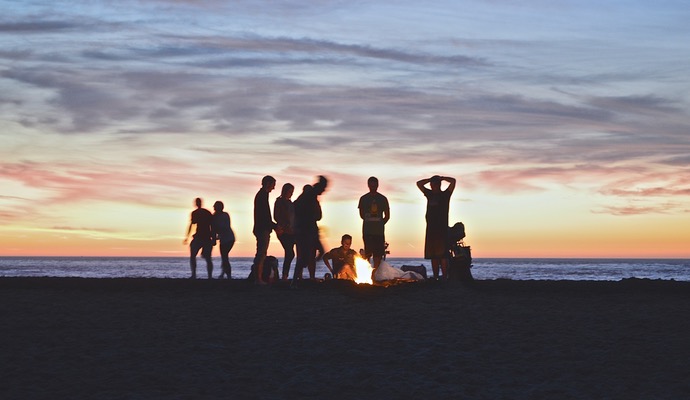 In some cases, friendship can literally save you – studies show prolonged lifetimes in people with significant non-familial relationships. In other words, as you age, it’s important not just to be connected to your family but to be close to others, people you can relate to and communicate.

The need to have friends is inherent in us, and separate from the need to have a family. While it’s clear why people are attached to their family – it’s the natural human instinct to protect your relatives, your flesh and blood – friendship is entirely different, and social mechanics behind that bond function differently.

Let’s look a little bit into why we need friends, how they help us adjust and improve ourselves, and how finding good friends in the 21st century can be challenging, but by all means still important.

There’s a lot of science on relationships. Particularly romantic relationships, and the social and biological relationships between relatives. How you feel about your mother and father, the behaviors and traits you inherit, how genetics and psychology play nice with each other.

Among two lovers, science has identified how hormones influence behavior and communication, the science of the “spark” of love, and there are countless studies attempting to identify just what keeps relationships alive over time.

But when it comes to talking about friendship, the research is generally pretty trim. There isn’t a whole lot to look at – but enough to intrigue. For example, science has begun to prove that friends help us feel more positive. This might trace back to the simple concept of strength in numbers – when even just thinking of a friend, we have the sort of emotional support behind us that lets us tackle challenges more easily.

Simply put, friends help us be more secure, confident people. So how does that make them necessary for the human psyche?

Well, it’s not just that having friends makes you more confident. It makes you live longer. On top of that, having steady relationships with friends improves the regulation of opioid releases in your body – which makes you feel good. The reason? Researchers believe that it might be that our brains are wired to reward us for being friendly with others. When we’re around people we like, and we share in positive vibes together, our brains like that, and reward us for the behavior – so that in the future, we try and make friends and be happy with them. This is probably because the people who were best at making friends and resolving conflict through positivity were the people who lived the longest. Back in the day when life was a lot shorter and human social dynamics were a lot simpler, determined by thousands of years of evolution as primates, being in good standing with people, in general, was always good.

If you are in bad standing with others, you get kicked out of the tribe – and exile equals death. Just like how rejection can trigger physical pain in us, and make us feel an actual flinching pang, so can friendship and positive social interaction makes us feel good through the release of dopamine and other similar neurotransmitters.

Have you heard about the introversion and extroversion spectrum? Basically, people exhibit different social and personality traits that put them somewhere between completely introverted and completely extroverted. Extroverts tend to make lots of friends. Introverts tend to have fewer friends but focus more on these friends.

There’s more to it than that – extroverted behavior can be expressed through the way people convey emotions, talk about themselves, engage in conversation and spend their free time, and vice versa with introverted behavior – but when we focus on the matter of friendship, this is one example of how we tend to attract and look for friends in different ways.

Some research suggests that moving around a lot as a kid may make some people more used to transient relationships with others – they look to find many friends because, in their experience, friendships can fall apart. In other cases, people seek to befriend fewer people, but keep these relationships intact over decades, because they’re used to them.

The thing about friendship is that there’s no upper or lower limit on how many friends you should have. The only limit is how much time and energy you can devote to your relationships. Friendships aren’t like romantic relationships – they don’t require the same commitments and attention. They can, but they don’t have to. Everyone shares a different, separate dynamic with the people who are important to them. Like another facet of individuality, the way we make and keep our friends says something about us – what exactly that might be, we don’t yet know.

It’s still a mystery, to be sure – but we know that people prefer to have friends in different ways, as long as they have them. Friends act as mirrors to us – not only do they have the capacity to help us feel safer and more secure, and stronger, but they also give us the ability to share different perspectives.

Through friends – the “good” ones, at least – we can experience different opinions and points of view, and learn more about people in general. We can also learn more about ourselves, by hearing from our friends how our behavior impacts others. It lets us grow and cultivate a more sensitive self-awareness, especially in growing up – putting the focus on how our behavior is consequential, held accountable, and requires thought.

Not Just Any Friendship

Friendship involves give and get, just like a successful romantic relationship – but the bond is different. In a way, friends cheer one another on, support one another and look towards each other for entertainment, fun, and advice. Justin Wells from Westwind Recovery said, “Friends are rocks to one another. They take on different roles in different situations, and a group of friends may have a unique social dynamic in that every person in the group has a specific role to fulfill that they only play while in that group.

Yet the key here is support. Friends support each other – that is the only requirement. However, they actually represent said support is irrelevant, so long as both parties see it as support. There are different dynamics present in a friendship based on age, sex, culture and individual factors and commonalities – and from an outside perspective, what might look like aggression or apathy is actually a mutually-understood sign of support.

The other qualification of a friendship is the respect of boundaries, and respect in general. Romantic relationships are incredibly intimate, and very close partners may have very few boundaries left if any. Total trust between two people is often a part of a long-lived, loving partnership. Friends don’t need to share that level of intimate knowledge to maintain a great friendship, and there are boundaries between people that are tested and respected. One example is to probe one another with jokes – when a nerve is struck, a mental wall or boundary is erected, an understanding that there’s a problem that is being resolved and a subject that shouldn’t be touched on. Respecting that boundary and leaving a friend to resolve it on their own or ask for help later is a sign of empathy and care.

Without that support, without the sense of empathy and the mutual respect, a friendship cannot properly exist. In these cases, relationships are either still developing, or selfish – one or both parties are in the relationship solely for themselves, and the dynamic they share is toxic rather than supportive.

Can Men and Women Be Friends?

The safest answer is this: find out. If you think you can be friends with your ex, then go ahead. If the relationship isn’t working out or is turning into something you want to avoid, then you have your answer for that specific case. That doesn’t mean all similar friendships are doomed to fail – just that this one, in particular, didn’t work out.

Friendships are there for emotional and moral support and aren’t really supposed to be sources of stress and friction. They can be – there are very few perfect friendships – but if you’re constantly fighting with your friend, you have to ask yourself if it’s really a good idea that you’re friends at all.

Sometimes, fighting between friends is good – it can be a way to evaluate one’s behavior. Ticking off a friend can be a sign that you’re in the wrong, that you’re not looking at the situation from someone else’s perspective, and that you should rethink your act. It can also be a source of needless strife with a friend dealing with an emotional situation they can’t contain, resulting in frustration and inappropriate venting.

With the Internet, a lot of things have changed. One of the particularly drastic changes has been the way social networking has affected human social dynamics in cultures where these networks, like Facebook and Twitter, play a central role in people’s lives. On one hand, it’s actually possible to maintain more friendships through the Internet – real friendships – through the fact that you can keep in touch with people even whilst moving around. Before the Internet, it was unfeasible to do so – only the strongest friendships survive the communication drought in times when expensive landline calls and letters were the only way to communicate.

However, there is still a difference between a friendly acquaintance and an actual friendship. There is no real definite number of how many friendships one person can maintain, especially in a world with instant global communication between 2 billion individuals, but most people will probably only ever have a handful of truly close friends.

Some fear that social networking is making it harder for “real” friendships to exist. And while the Internet and technology, in general, will probably continue to introduce new forms of communication and different social dynamics, the core principles of friendship – the support, respect, and empathy – remains today just as it has hundreds and thousands of years ago. Facebook isn’t stopping you from sharing real memories with your friends – in the contrary, it gives you chance to catch up with old relationships and keep in touch with people from your past.

You need friends, no matter how you find them or share memories with them. The way you communicate and act with your friends may be different from how others communicate and act, but that doesn’t matter – as long as you have people to share life with.

However, it’s also alright not to have friends now – especially for children and teens, struggling with their own emotions and a social mesh they haven’t quite figured out yet. There are people who find themselves ostracized or simply not quite compatible with others in their environment.
School, in particular, is a very small space – it’s not very unusual to feel lonely to some. But that will change with time. For teens, being alone is a painful experience, especially during the formative years of puberty and high school. But forcing yourself to fit into other groups can be worse, and damaging to a person’s development. It’s better to look online for support. Today, with the Internet, there’s no reason not to find people you have things in common with – and after school, there are plenty of opportunities to find adults who shared your experiences and opinions, and with whom you feel comfortable.

The Reliability of Mexican-Made Vehicles

If you are concerned about the quality and reliability of your next new vehicle, you’re likely looking into a number of different factors that…