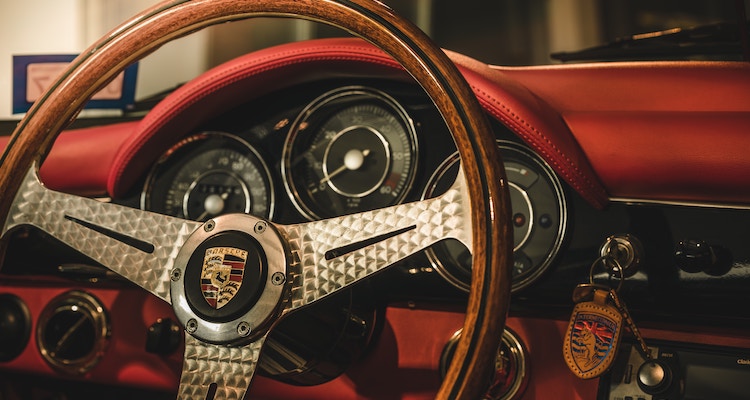 In 1875, Ferdinand Porsche was born in the Austrian village of Maffersdor. As a young man he developed a fascination for mechanical and electrical things and as a teenager actually built an electric car. At the age of 18, he met Jacob Lohner, a local early automobile manufacturer and built the Lohner-Porsche electric car. In the early 1900s, it smashed European speed records by obtaining a remarkable 35 miles per hour!

During the 1920s, Porsche’s career path drew him to the German automaker Daimler where he helped design 6.0- and 7.0-liter racing engines for Mercedes-Benz classics such as the iconic SSK. Working as a consultant for Daimler, this is where Porsche honed his craft and became one of the world’s most famous automotive designers.

During the 1930s, as a contract assignment, Porsche was involved in an infamous design assignment that involved Nazi dictator Adolf Hitler. It was for an inexpensive, air-cooled rear engine car that Hitler wanted to be built in sizable numbers.

Note that is not uncommon to hear stories of Ferdinand Porsche being a member of the Nazi party. This is not true. Porsche’s firm simply worked on the design of the car that was to be called the “Volkswagen”.

When WWII broke out, Porsche and his design firm, which now included his son, Ferry, turned their attention to war production.  They were responsible for the design and construction numerous fighter aircraft subassemblies.

After WW II ended, Porsche and Ferry decided to once again build automobiles, but this time they would be their own. Using modified components from early VWs, they built the first Porsches. The early prototypes, named “the 356” proved very popular and in 1948 the Porsches went into full production. In 1950, the factory relocated to Zuffenhausen, Germany, and general production of the 356 continued until April 1965 when production started on the new 911/912 automobiles. According to Winner VW, a Volkswagon dealer in Dover, DE, a total some 76,000 Porsche 356s were made! Today, the 356 Porsches are extremely collectible classic cars and are noted as having some of the finest lines of any automobile ever built.

Tailoring innovations – How is technology changing the suit?

Beau Brummell, a gentleman in the early 1800’s, is said to have been the first person to wear what we know as the suit….