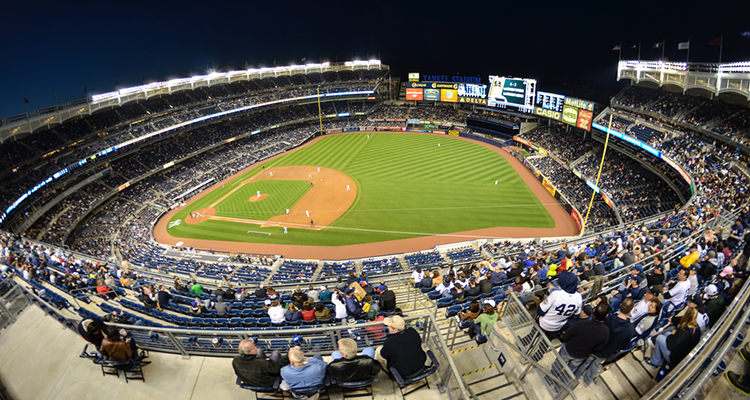 The United States is always among the top destinations for tourists to descend upon during the summer months.

The country boasts some of the most exhilarating cities in the world with the culture of New York City, the passion of Boston and the glorious sunshine of Los Angeles.

All three provide great venues for sporting fixtures, especially on the east coast where the rivalry between New York and Boston has offered some intense moments over the years.

The New York Yankees and the Boston Red Sox have been rivals throughout the history of Major League Baseball, stretching back to the days of Babe Ruth in the early 20th Century.

The Hall of Famer was part of the Red Sox team that won the World Series three times before he was sold to the Yankees, where he dominated the sport for the next 14 years.

Boston endured an 86-year wait for their next crown, which was nicknamed ‘The curse of the Bambino’ after Ruth, while the Yankees racked up the titles throughout the rest of the century.

The Red Sox ended their strife with one of the most memorable comebacks in playoff history by rallying from 3-0 down in the 2004 American League Championship Series to beat their rivals 4-3. They then ended the drought when they crushed the St Louis Cardinals in the World Series.

Fenway Park is one of the most iconic sports venues in the United States, and is a must-visit stadium even when the Sox are not in action.

The renowned Green Monster wall provides challenges for all hitters to clear, but the eruption of noise when achieved is truly an unforgettable moment, which Shane Victorino discovered with his Grand Slam in the 2013 AL Championship series.

Yankee Stadium provides equally exciting entertainment, although the fortunes of the team have dwindled since their World Series in 2009.

The ground is relatively new after being constructed eight years ago to replace the iconic old venue in the Bronx, which had started to feel the effects of father time after 81 years of use.

Situated away from the hectic streets of Manhattan, it offers a getaway from the city not provided in Boston, while the new stadium has also allowed an expansion into the MLS.

New York City FC made their debut appearance in the league in the 2015 campaign and, after a tough opening season, they have managed to reverse their fortunes and in the latest football betting odds are 10/1 to win the 2016 MLS Cup.

The club attempted to make a splash in 2015 by adding big names such as David Villa, Frank Lampard and Andrea Pirlo to their squad.

The club tasted victory in their second match of the campaign with a 2-0 victory over the New England Revolution, but then endured an 11-match run without a win to put early pressure on Kreis.

City lifted the tension by winning three games on the spin during June, but New York only recorded a further three victories from their next 12 matches, leaving them out of contention for the playoffs.

A late surge could not save Kreis as the club opted to sack him, while the signings of Lampard and Pirlo failed to bear fruit as both players were only sparingly available, with 23 appearances and three goals between them.

New York turned to Arsenal legend Patrick Vieira to take the reins, while they made minimal additions to the squad during the off-season.

Their struggles in the MLS continued at the start of the 2016 campaign, with just one win in their opening eight matches.

Villa has turned on his class in recent weeks to drive his side to a series of wins and a stronger position in the Eastern Conference.

However, Vieira and his team know that they will have to maintain their form throughout the campaign to secure their first MLS Cup triumph.